Calicut or Kozhikode is located in the northern end of Kerala and has a major significance in the history of India.

During the Sangam period (3rd and 4th BC), Chera Empire had control over trade on different parts of Kerala with the rest of the world, thus playing a remarkable role in fostering trade relations between Kerala and foreign nations. Chera Empire had an uninhabited land and this uninhabited land became Calicut which was part of land division by Cherman Perumal, the last king of Chera Empire. Due to its status as a major trading point for Indian spices, Calicut was known as the city of spices during the middle age. Calicut has been trading with the Arabs, Chinese, and Europeans for over 500 years.

Calicut, which was once part of the ‘Malabar’ region, has witnessed different time periods and historical events like invasion of foreign power, freedom struggle, which resulted in the independence of India. Famous travelers like Vasco da Gama, Steven Van Ger Hagen, and Ibn Battuta have left their imprints on Kozhikode.

Notable events which took place in Kozhikode are the Mysore invasion in 1765 where Kozhikode became an important part of the Malabar region due to trade. The arrival of the Portuguese was followed by the Dutch and the arrival of British. Following this, Calicut witnessed national movement, and the Indian independence in 1947. Before the British rule, the district was ruled by Sri Samoothiri Maharajas where Kozhikode was the capital of Malabar.

In Kerala, the primary center for Quit India Movement and the emerging Communist party was the Calicut district. After the Independence, the Malabar was split into three independent parts- Kannur, Kozhikode, and Palakkad.

Kozhikode beach, apart from being a favorite spot for the locals and tourists, is currently one of the most visually pleasing parts of Kerala. The shore itself witnessed battles, the arrival of ships, etc, in the past. Freedom fighters conducted the “salt march” on the beaches of Calicut where the protestors were attacked by the British during their rally.

Notable places that you could visit in Kozhikode are :

S.M Street or “Sweet Meat Street” which became famous for its Halwa or “Sweet Meat” as described by the Europeans. This place is over 600 years old and is buzzing with sellers and customers even today. A Parsi cemetery called Anjuman, which is now abandoned, is also located here.

Close to S.M Street is the  Mananchira or ManaVikraman tank, a man-made freshwater pond, which is said to cater to the  water needs of an entire palace complex. The pond is rectangular in shape and is fed by natural springs. The laterite which was taken from this pond has been used to build two palaces located in close proximity to the pond. Several major institutions like mosques, factories, etc. surround this place. Town Hall, which was built by salt merchants in 1891 can also be seen here. This was a significant center for freedom fighters.

Tali Siva temple, an archetype built around 12th century, remains one of the most important spiritual centers in Calicut. Mishkal Mosque, built by an Arab merchant over 600 years ago is one of the oldest mosques in Calicut. In 1510, the mosque witnessed the attack by Portuguese and the top floors still display some of the damage incurred during that time.

Calicut, as a district, is the second biggest urban agglomeration in Kerala. In the past two years, the district has been witnessing a steady growth in the real estate sector. 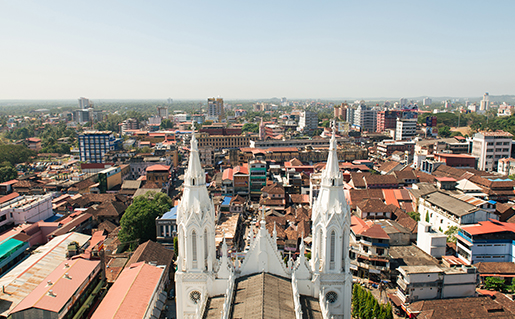